Get To Know Our NRLB Finalists, And Cast Your Vote By October 25 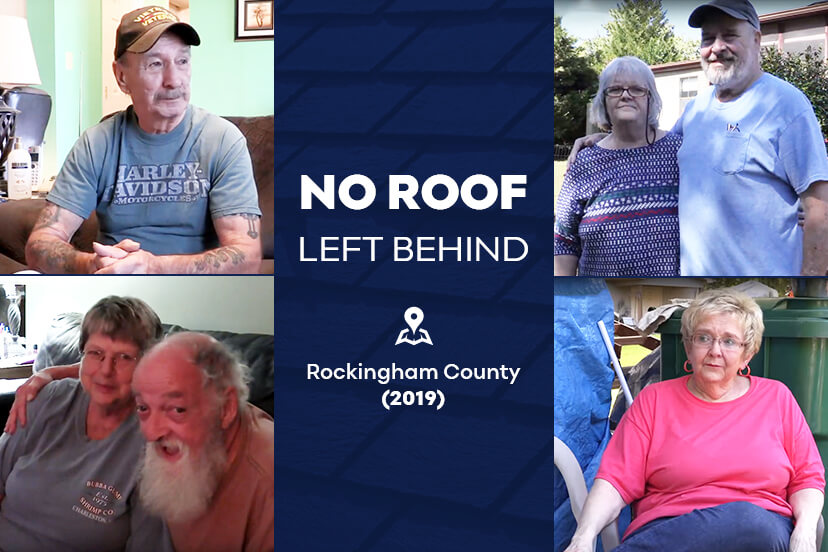 Providing the best roofing and home improvement services is what we do at Skywalker Roofing, but we’re really about is helping people. We’re always looking for ways we can contribute to the community, and one way we do that is through our No Roof Left Behind (NLRB) program, where we provide a FREE ROOF to a chosen local homeowner in need. Skywalker has provided a number of free roofs for deserving residents around the Triad, and our current round of NRLB 2019 is focused on the fine folks of Rockingham County, NC.

We received nominations from members of the community for over a month, and the list of nominations has now been narrowed down to four worthy finalists. We’d like to introduce you to each finalist and share a little of their story with you below, and then we invite you to cast a vote for the finalist whom you feel most deserves to receive a free roof.

Mario Puleo is a 75-year-old Vietnam vet who just needs a little help. In March of 2017 the company he had worked with for 48 years closed with only one day’s notice. Since then, Mario has been unable to find regular work – he believes most employers discriminate against him solely due to the fact that he’s 75. His roof has sprung a leak which Mario has tried to patch himself, but he hasn’t been successful. He also knows he really shouldn’t be trying to get on the roof at his age, either. Mario says he could use any help he can get, and he’d really appreciate receiving a free roof replacement.

Dale and Vickie Hall have always taken great pride in their home, and they’ve been intentional to maintain its appearance by doing things like laying gravel, painting the shutters, and planting flowers. In 2013, Dale was diagnosed with Parkinson’s disease and then suffered a heart attack, so he’s now unable to work outside the home and is much more limited in what he’s able to do. Dale and Vickie still work hard to try and keep their home beautiful, but they simply don’t have the financial or physical resources to be able to give their roof the attention it now needs.

Watch Dale and Vickie share more of their story

Bill Vernon has had successful surgery for two brain aneurysms, but then suffered a stroke a few years ago that left him unable to work. His wife Sandy had to quit her own job to be present and help take care of Bill. She now works as an on-call substitute teacher for Rockingham County Schools, so they have to operate on a very fixed income. Regardless of their own situation, however, Sandy still pursues her passion of helping others by volunteering with a number of organizations that serve the community. Those who know Bill and Sandy say that they really are a caring, selfless couple who deserve to receive a free roof.

Watch Bill and Sandy share more of their story

Jerry Trent is a veteran who was exposed to Agent Orange while serving during the Vietnam War, and as a result he now suffers with COPD. With his current breathing struggles, it’s all Jerry can do to walk from one room to the next. Jerry and Hilda also recently lost their 22-year-old grandson who had lived with them since birth. The wounds of that loss are still very fresh, and the Trents are just facing some really tough obstacles right now. They would very much appreciate your vote to help them get the roof replacement they need.

Watch Jerry and Hilda share more of their story

Each of these NRLB finalists has a special story to tell, and each one is certainly worthy of your voting consideration. Whichever finalist receives the most votes will be awarded a free roof from Skywalker Roofing. And since Skywalker is committed to doing everything with excellence, it won’t just be some run-of-the-mill roof replacement, either. We choose to go the extra mile for our NRLB winner by installing a complete roofing system with premium components from Owens Corning, ensuring that this is the last roof this family will ever need!

You can cast your vote for one of these four finalists now – just head on over to our No Roof Left Behind page. Votes for finalists will be accepted through October 25, and we’ll reveal the NRLB winner through a special announcement on October 31. Every vote counts!

Thank you for partnering with us at Skywalker Roofing, where together we can help provide a roof for those who need it the most! Why You Should Choose Metal for Your Commercial Roof